Bach, Seagulls and British Jazz at the Vivacello Festival

The Vivacello festival triumphantly started the second decade of its existence. Like a good cognac, every year it becomes richer, revealing new notes of its rich ‘blend”. At the same time, the hosts — cellist Boris Andrianov and Tamaz and Iveta Manasherov from the U-Art Charity Foundation — manage to preserve the traditions that have emerged over the past 11 years: the festival features the best musicians of our time, and the programme is always elegant and diverse.

70 or 80 years ago no one could even think of the cello making a brilliant ‘solo career’, catching up with the piano and the violin. The Vivacello festival made an undeniable contribution to the instrument’s emancipation, and became one of the most anticipated live music events in Moscow. This year the festival’s scale was unprecedented, and the seven concerts at different venues were almost impossibly diverse: classical and contemporary academic music, jazz, and even theatre. Recently, the festival palette has been complemented by workshop. 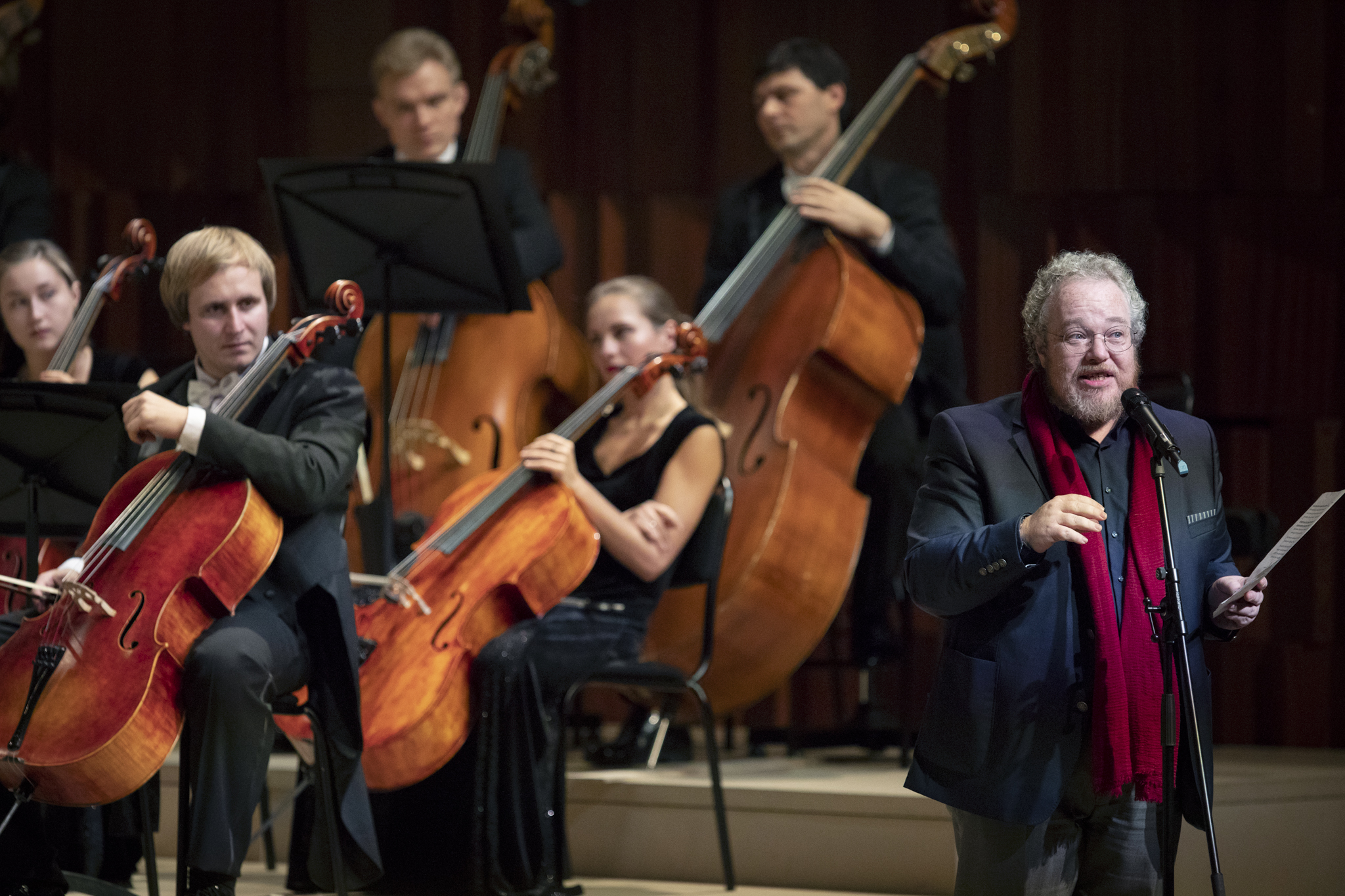 Artem Wahrhaftig, presenter of concerts of the festival 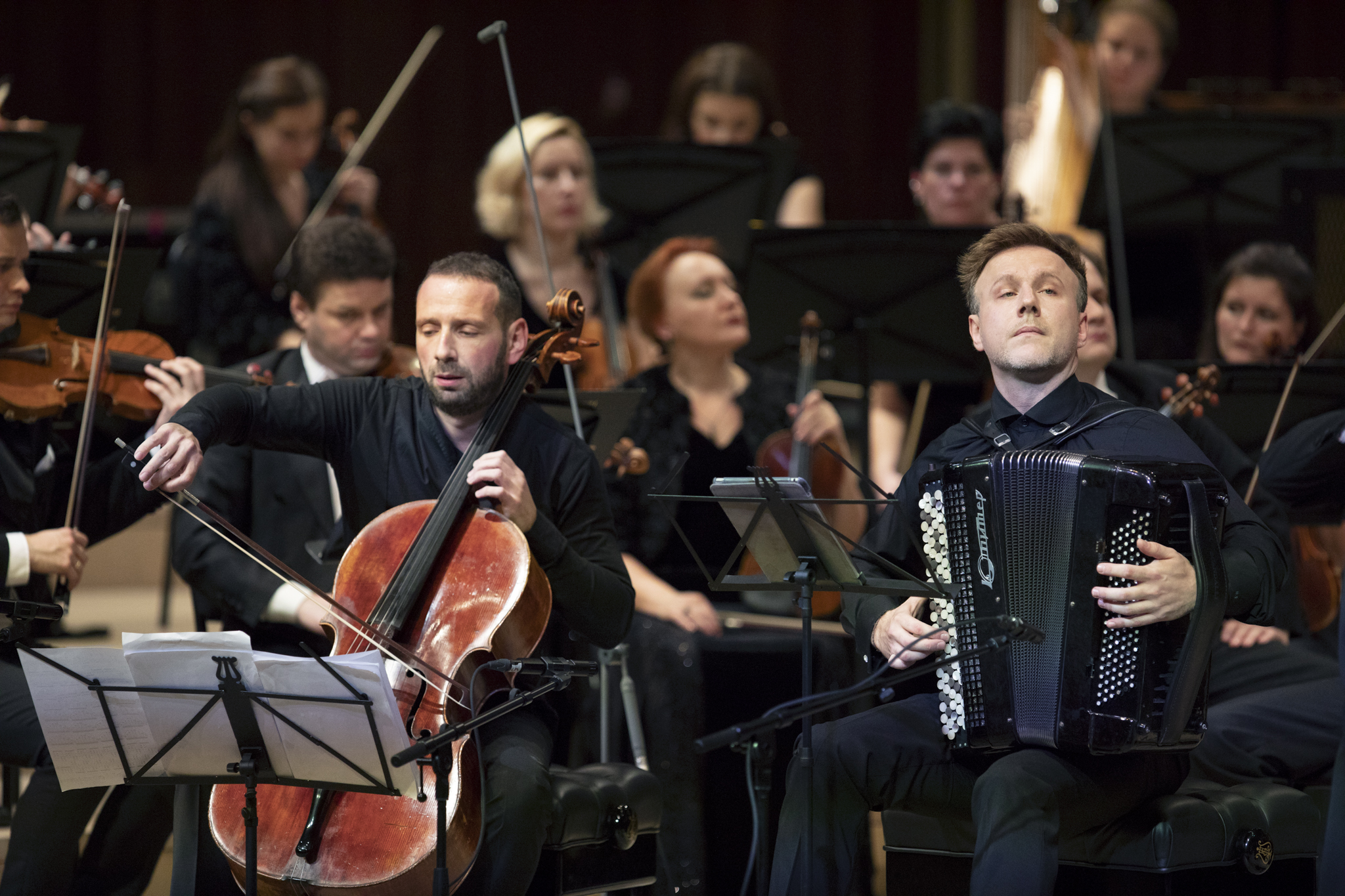 Zaryadye Concert Hall again hosted the opening concert. However, this year’s edition went without world premieres that the festival boasted in previous seasons. The Vivacello seeks to replenish the cello repertoire: for example, the last year edition opened with  Gia Kancheli’s opus T. S. D. for Cello and Orchestra. In 2019 Anatolijus Shenderovas was to compose the opening piece, but in March he passed away. Instead, the opening offered the Russian premiere of the concerto for cello and accordion (bayan) Le Rêve de Maya by the French composer and guitarist Samuel Strouk. A rare combination of timbres was beautiful and convincing, especially in the excellent performance by Boris Andrianov and bayanist Nikolai Sivchuk. Dmitry Filatov, winner of the recent Svetlanov International Conducting Competition, confidently led the Russian Philharmonic orchestra. The ensemble with Narek Hakhnazaryan produced a bright and explosive interpretation of an almost classical masterpiece — Concerto-Rhapsody for Cello and Orchestra by Aram Khachaturian. 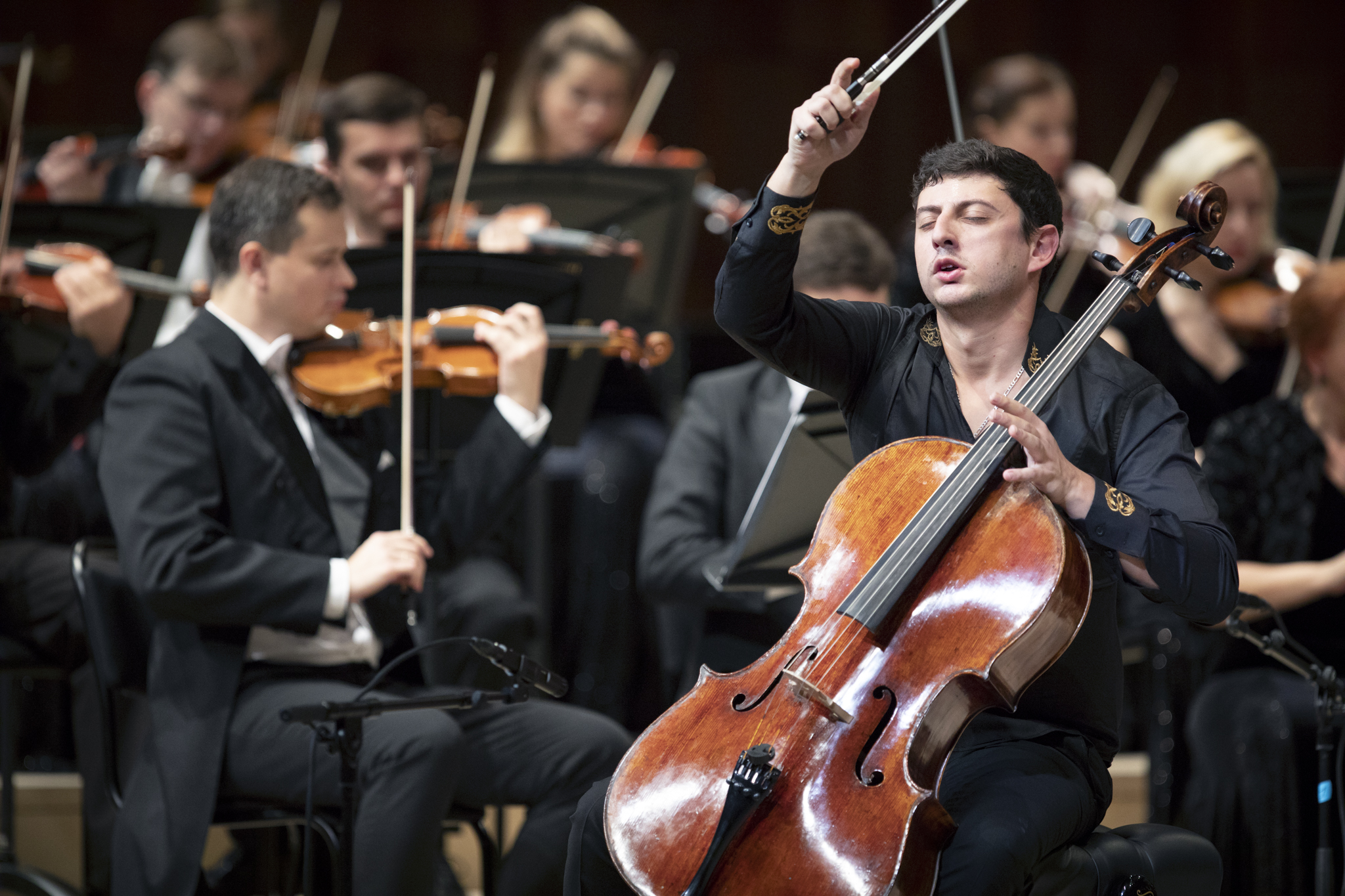 The evening boasted a special guest, the legendary Polish composer Krzysztof Penderecki. The festival programme included his performance as a conductor, but for health reasons the Maestro chose to stay in the audience. He delegated the Concerto grosso No. 1 for Three Cellos and Orchestra to the conductor Maciej Tvorek. The solo parts were performed by brilliant musicians: Claudio Bohorques and Danjulo Ishizaka, familiar to the audience from the previous Vivacello editions, as well as the newly minted star, winner of the XVI Tchaikovsky Competition, eighteen-year-old Chinese Chen Yibai, who yet again surprised the audience with his masterful and surprisingly mature performance. 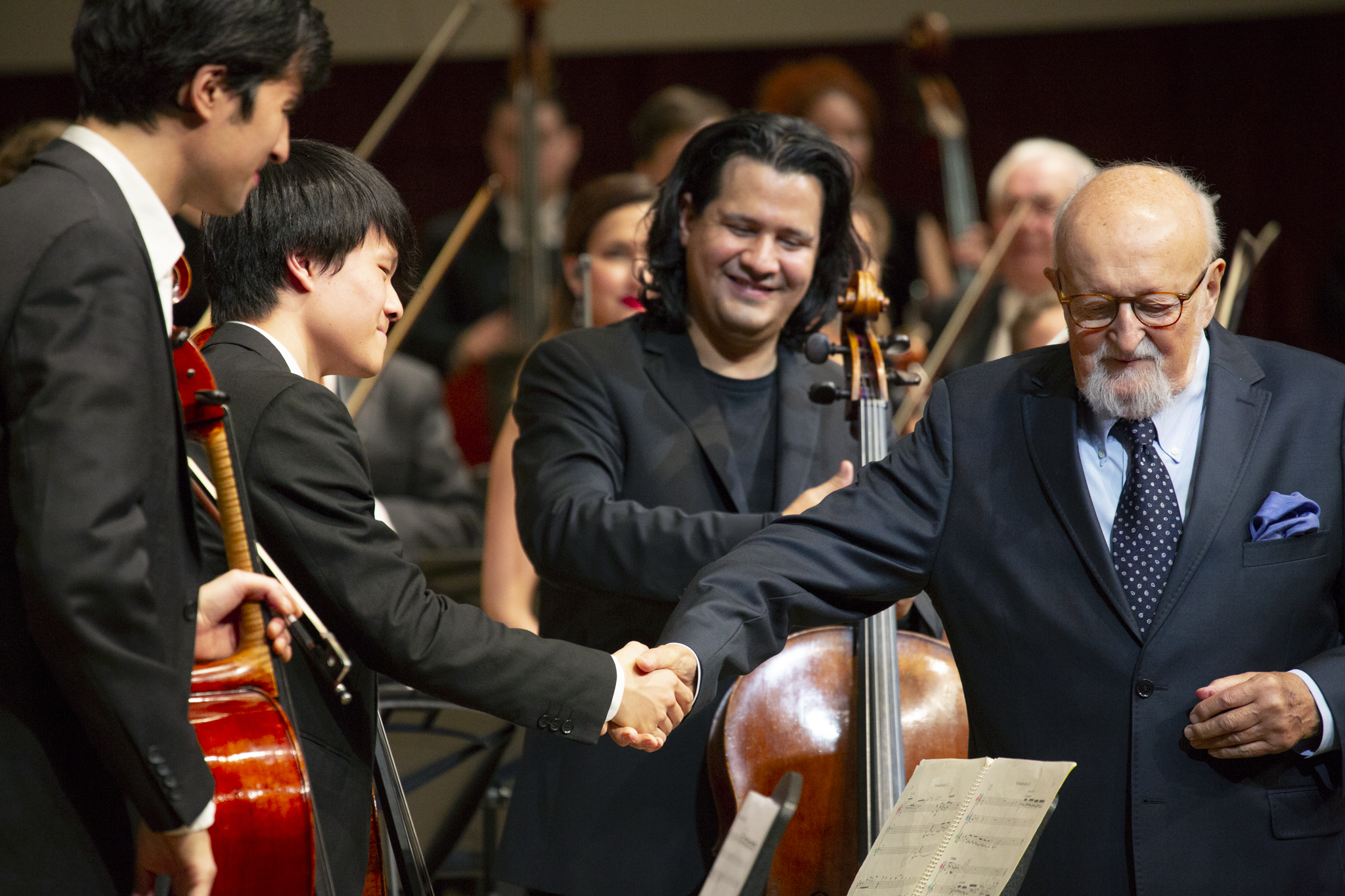 Krzysztof Penderecki thanks the soloists after performing Concerto grosso No. 1

The Small Hall of the Moscow Conservatory hosted Cello Concerto with Character where the audience could hear Boris Andrianov imitate the cries of seagulls and the typical nasal Brodsky’s voice with the cello, and the actress Tatiana Drubich reincarnate into the cello. It was much more than a concert — a real performance. The Story of One Instrument is a story by writer Sasha Filipenko, and Drubich perfectly embodied the 300-year-old graceful beauty by the Venetian master Domenico Montagnana. The event also showed a memorable meeting: Andrianov’s cello saw her ‘sister’ for the second time, introduced by the British cellist Guy Johnston. The story was accompanied by music: four Duets for Two Cellos by R. Gliere and Sarabande from Suite No.3 by J. S. Bach. At the end of the concert a bad news was broken: Boris Andrianov will soon have to part with the Montagnana instrument, as for financial reasons it was to be returned to the State Collection. 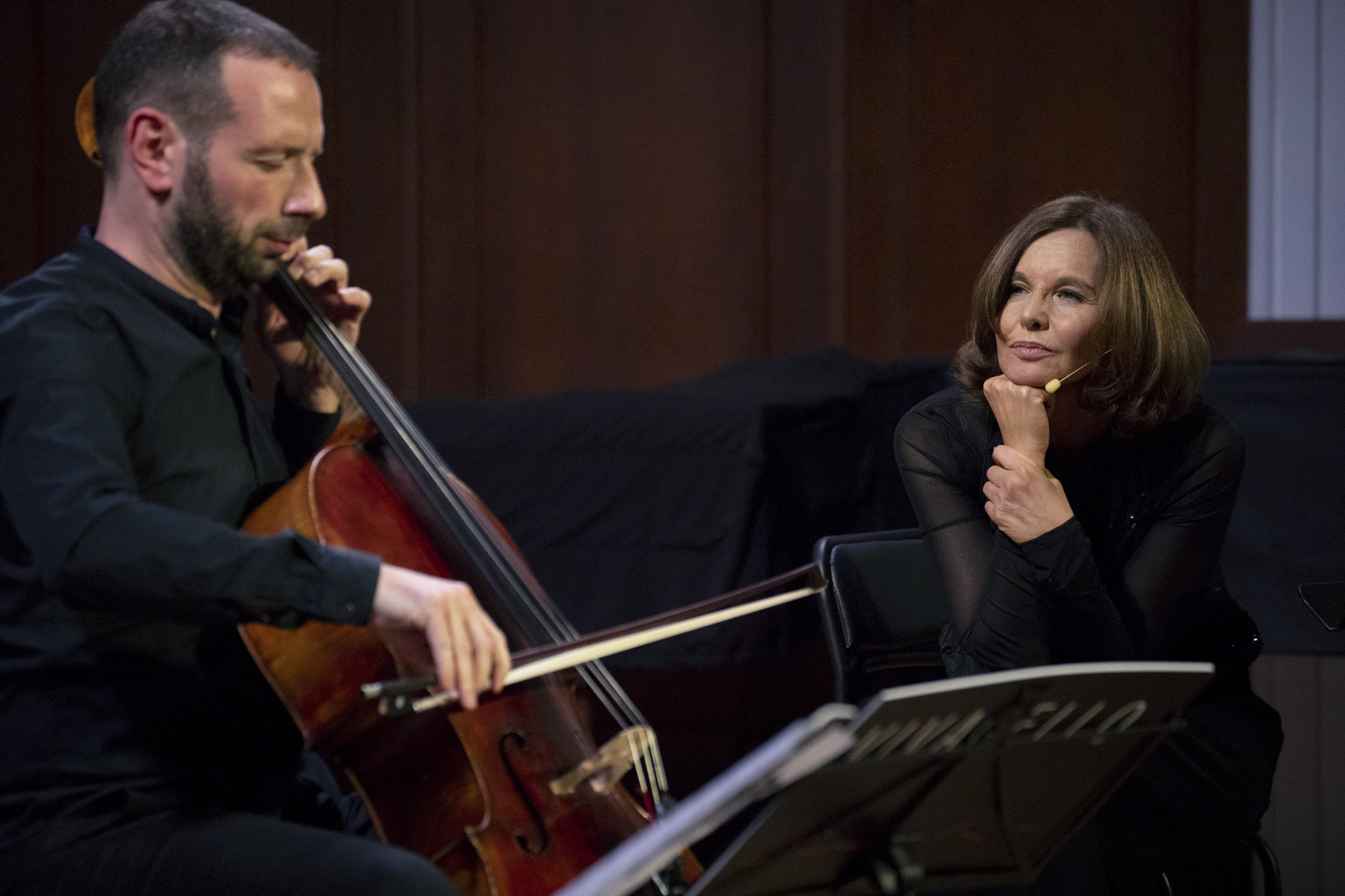 The performance was not the only experiment at the festival. The Master and Muses: Gabriel Jebran Yakoub’s Cellos was dedicated to the famous St. Petersburg master, who is often referred to as Contemporary Stradivarius. Jakoub is a certified cellist and shows deep affection to the instrument. He had long dreamed of collecting his creations in one place, and it finally happened: Moscow and St. Petersburg cellists met in the Ruin Outhouse of the Shchusev Architecture Museum and played nine Gabriel instruments. 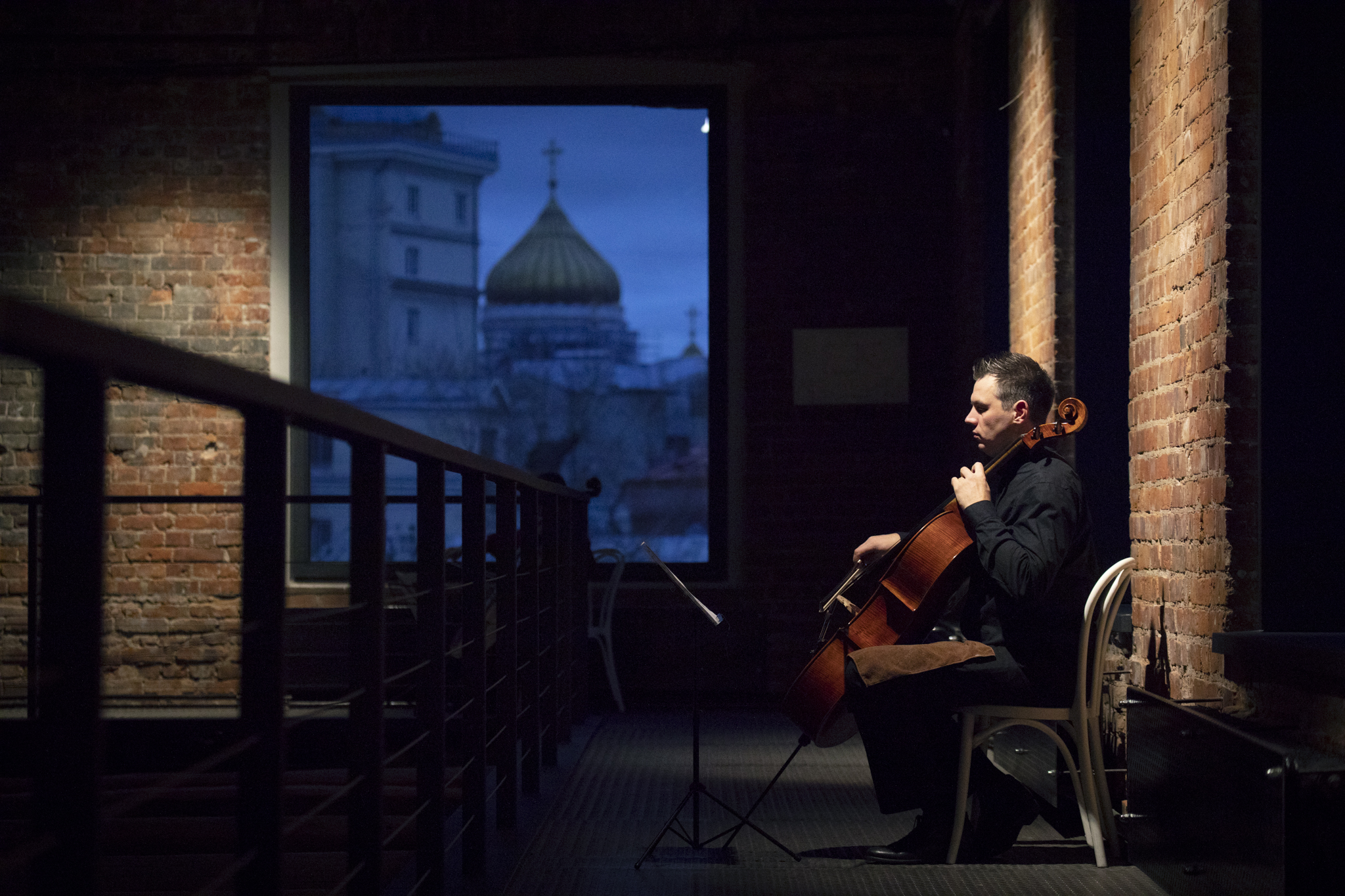 The balcony encircling the wing hosted Boris Andrianov, Anna Koshkina, Andrew Yacynych and Alexander Ramm playing Sarabande from Bach’s 6th Cello Suite (adapted for 4 cellos). As the musicians stood all along the balcony, creating a stunning acoustic effect: the music literally soared above the audience. By the way, Jakoub himself took the bow, and joined ten other cellists to play Piazzolla’s passionate Fuga y misterio. 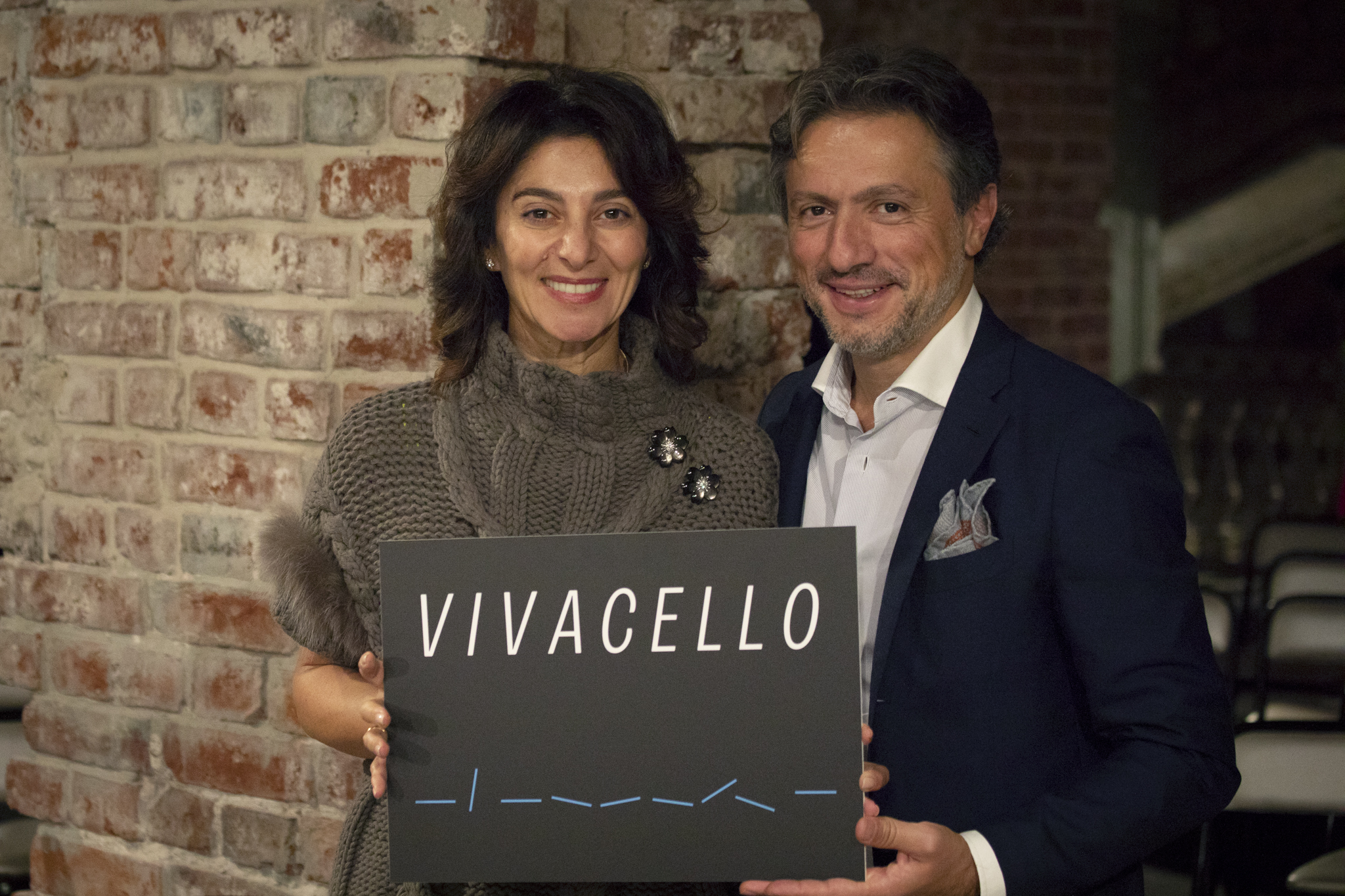 Iveta and Tamaz Manasherov, founders of the U-Art Foundation, at a concert in the Ruina wing of the Museum of Architecture

Halfway through the festival, the guitar joined the celebration of cello music at a joint concert with the International Alexander Frauchi Festival. Despite the title — Venue: Guitar VS Cello — no rivalry was in sight. One of the best classical guitarists in Russia Dmitri Illarionov and Boris Andrianov are good friends, and the obvious pleasure they derive from playing with each other is always shared by the audience. Together with Anna Koshkina and Philipp Chizhevsky, leader of the Questa Musica ensemble, they played a spectacular opus by Giovanni Sollima When We Were Trees for two cellos, the guitar and a string orchestra. The original piece was composed for two cellos and strings, but a long-time Vivacello friend Georgy Gusev made a new version with the guitar, and thus a new premiere appeared in the festival programme. 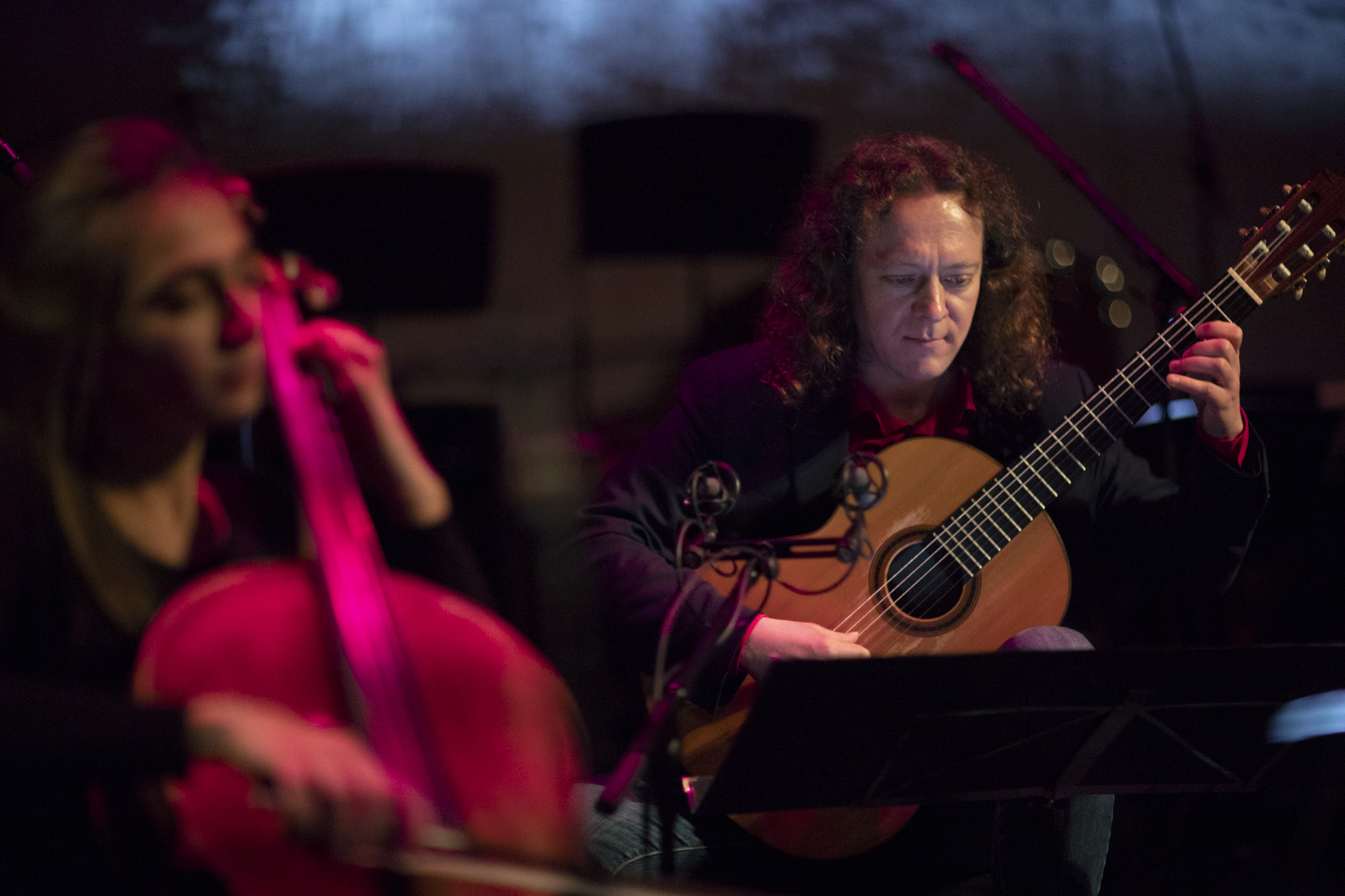 For the first time the Vivacello venues included a jazz club, where the British musicians set the tone and rhythm for two nights. “I said in London that I needed something non-unconventional and unusual,” Andrianov comments. The Shirley Smart Trio and Ayanna Witter-Johnson Ensemble presented the cello in its jazz incarnation. 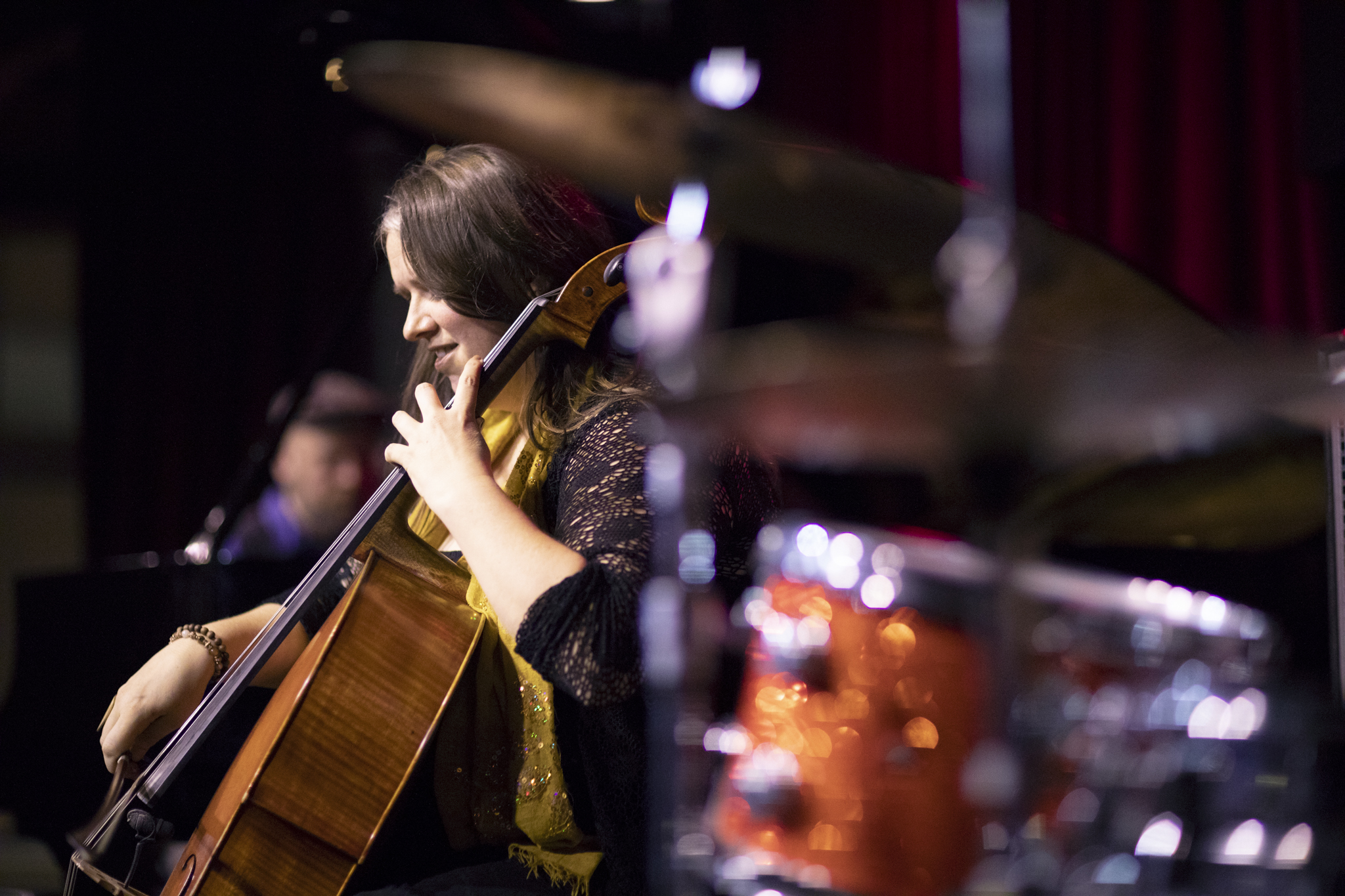 While Shirley merges the classical music with jazz and the Middle East heritage, Ayanna’s music exists at the intersection of blues and pop, inspired by spirituals. Shirley Smart’s dynamic and vibrant music was succeeded by Witter-Johnson’s graceful and succinct songs. Inimitable Ayanna’s vocals almost surpassed her skills as a cellist, which she enriched with guitar playing techniques. 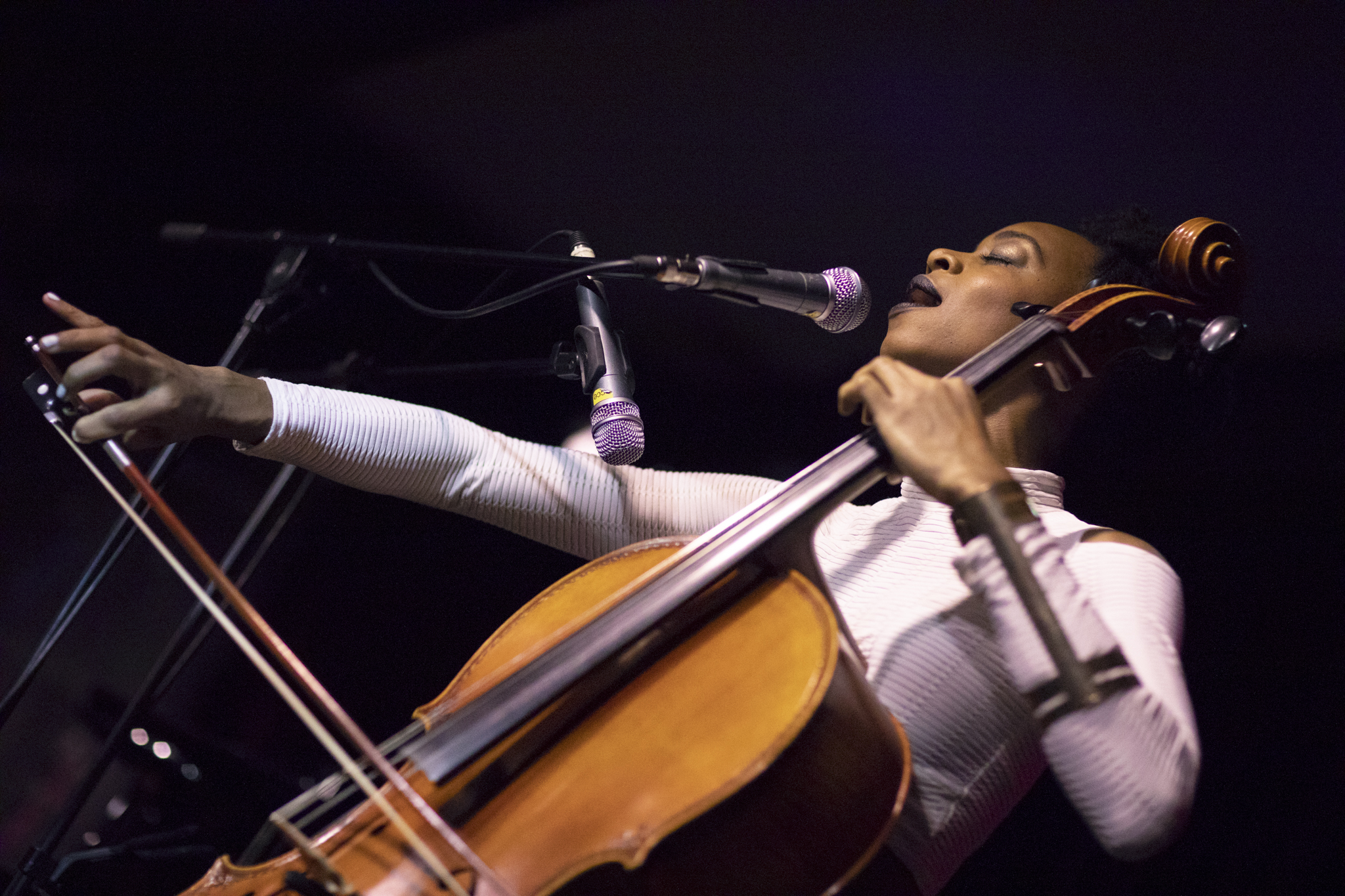 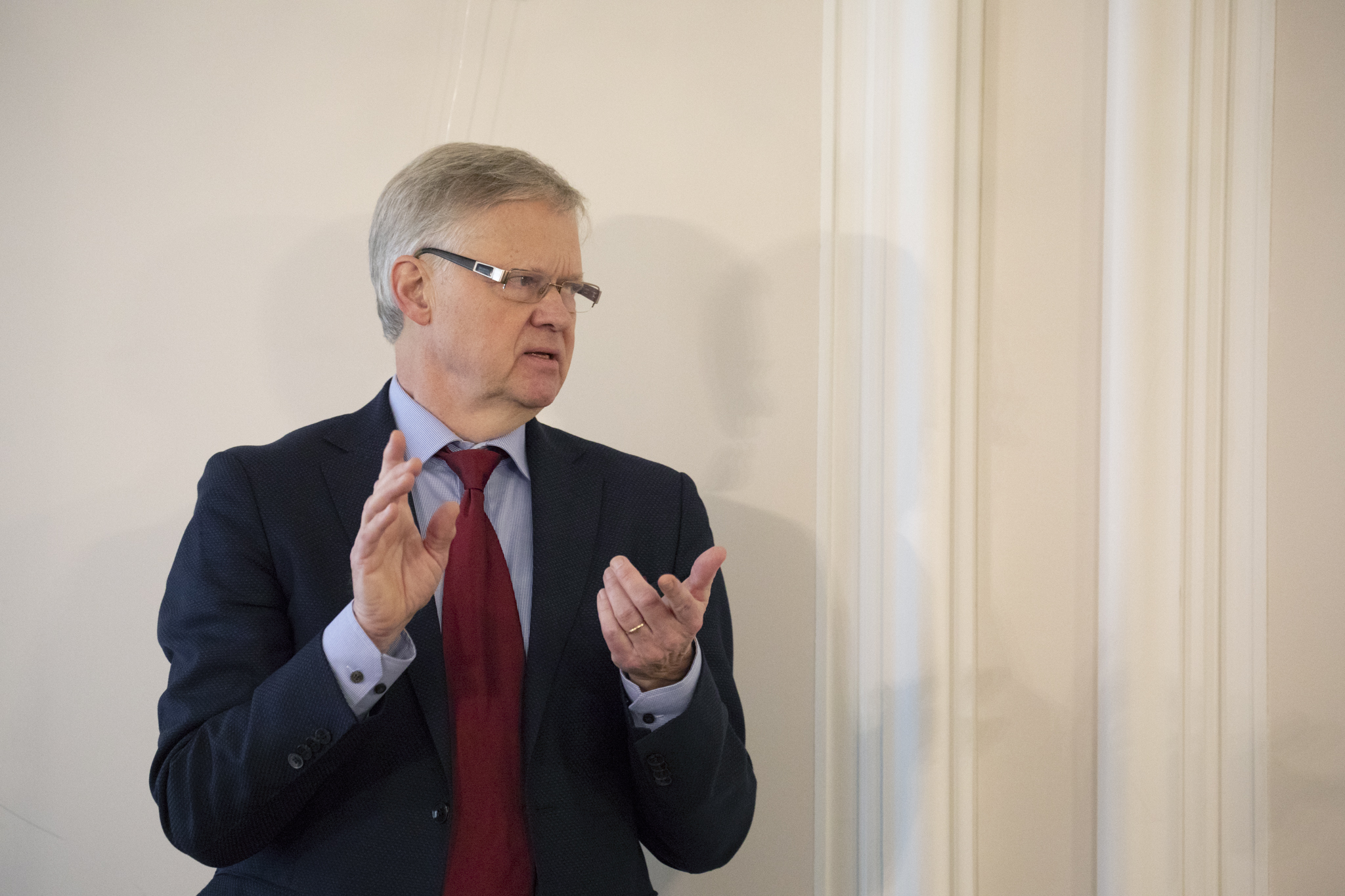 Mstislav Rostropovich’s name is sacred for the cello world, and therefore the Vivacello festival is unthinkable without him. The Moscow Conservatory’s conference hall hosted the video course presentation My Lessons with Rostropovich by the Professor of the Sibelius Academy in Helsinki Raimo Sariola. In 1972-1974 he studied with Mstislav’s class and recorded his lessons in secret. He was not alone — for example, Misha Mayskiy also did ‘bootlegging’. Today these archival materials evidence Rostropovich’s unique teaching skills. Commenting on the video lessons, Sariola shared a lot of memories about his teacher’s personality, in particular, about his ‘inhuman’ ability to instantly remember any information (not only confined to music). participants of the master class

The festival closing at the Tchaikovsky Hall became the Russian premieres night. The Concerto for Cello and Orchestra by Gerald Finzi, a famous British composer, reached us after almost 65 years. The Moscow event featured its first performer, venerable Raphael Wallfish. Wallfish’s rich sound, as well as the clarity of concept and Justin Brown’s striking conducting technique provided a coherent impression. The premiere of the Concerto for Violin, Cello and Piano with Orchestra by Anatolijus Shenderovas was performed in memory of the Lithuanian composer. Pianist Andrei Korobeynikov, British cellist Laura van der Heijden and violinist Aylen Pritchin, winner of the recent Tchaikovsky competition, presented an expressive and profound interpretation of the work. After all the experiments and premieres, the festival featured another surprise. Victor Simon, the legendary cellist, former BSO concertmaster who held the position for 50 years, appeared on the stage (in January 2020 the musician will turn 90). To the accompaniment of the orchestra he spent so much time with, Victor charmed the audience with the nobility of his sound, style, and virtuosity. The orchestra performed the Ministrel Song by A. Glazunov and an arrangement of Wolfram’s romance from Wagner’s Tannhauser. The event closed with a cello and wind orchestra by Friedrich Gulda (with Boris Andrianov as a soloist). This opus, where Gulda eccentrically and boldly mixed styles and genres (jazz rock, landler, menuet and even march) became a perfect epigraph for Vivacello 2019 — as bright, concentrated and diverse as the festival itself. Boris Andrianov, cellist and artistic Director of the festival, and Justin Brown, conductor of the closing ceremony